To The Sound Of The Guns: Excerpt Ch 4

CHAPTER 4: Tools of the Trade

So, what kind of tools did the Marines use while deployed in the Republic of Vietnam? You will be introduced in this chapter to the resources, personal gear, implements and supporting weaponry that helped 1/27 throughout its journey in the fields of fire of I Corps. Many of the weapons were time tested and some were not, but the Marines grumbled a little, adjusted, and made the best of both good and bad situations with these “tools of the trade.”

The M274 Mechanical Mule was designed for carrying ammunition, cargo, weapons, chow, personnel, and sometimes mounting a 106mm recoilless rifle. The mechanical mule performed countless resupplies and was a true workhorse during 1/27’s deployment. It operated in full-time four-wheel drive with a two-speed (low & high) transfer case, and had three gears forward and one in reverse. 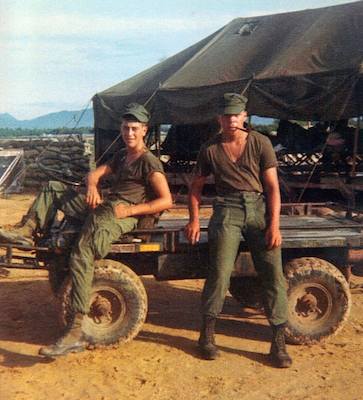 The mechanical mule was designed to operate in rugged terrain and to be helicopter or parachute dropped and driven away on any battlefield. It also had the capability to ford rivers or streams up to eighteen inches in depth.  This beast of burden could carry a potential payload of up to 1,000 pounds. The steering wheel allowed adjustments for driving, walking, kneeling, and crawling. Its top speed was about 25 mph. It was truly a welcome tool during the Vietnam War. 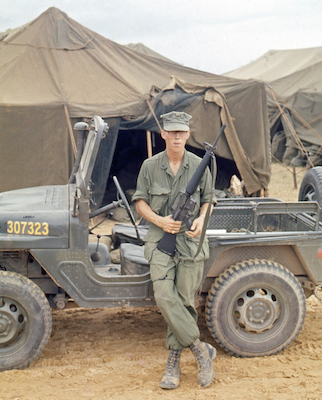 Made of aluminum, the M422 “Mighty Mite” Jeep was the lightest of small military vehicles designed with all-around independent suspension. Basically a two-seat vehicle, it could move up to six people due to fold-up seating. These little workhorses were adept for airlift, extremely rugged terrain, and the deep-water fording of rivers and streams. They were gas-powered and had a cruising range of about 240 miles. The above pictured Mighty Mite was assigned to the 1/27 communications platoon of H&S Company and was utilized daily by the Communications Chief and senior personnel in the Communications section.

Upon arrival in the Hue area during late March and early April 1968, 1/27 constructed their Command Post (CP) at the east edge of the La Son school building, about two kilometers directly east of the Citadel. The line companies had positioned themselves in strategic positions and began working their assigned sectors out of Platoon patrol bases (PPB) along Route 551 all the way to the coast, and south toward Phu Bai on National Route 1. The coastal ramp at the Tan My villages on the coast was called Col Co (Colonial Company) and had been operated by a private concern in previous years. Naval LCU vessels carried supplies and fuel from the Col Co ramp on the coast into the Naval Support Activity ramp in Hue City via the Perfume River. A pipeline had also been constructed along Route 551 from the facility to pump fuel into Hue. During one hot day in early April, the pipeline along Route 551 close to the schoolhouse burst into flames. How this happened, no one remembers. The explosion and fireball consequently injured a small girl standing close to the fuel line. Gunnery Sergeant Manuel Gomez was close to the scene and calmly commissioned Corporal Doug Setley to get the communications “Mighty Mite” jeep while he and Corporal Grady Birdsong treated the little girl. She was suffering from second- and perhaps third-degree burns. Birdsong remembers, “When Corporal Setley and I lifted her into the back of the Mighty Mite a lot of the skin came off her arms…I had never since heard that level and intensity of screaming which emanated from that poor little child. The wailing and screaming were constant and unnerving as we raced toward the Naval Support Activity and medical facility in Phu Bai about fifteen Kilometers to the south of our CP’s position.” Corporal Doug Setley drove that “Mighty Mite” as fast as it would go, weaving in and out of the road traffic on Highway 1. “It was an unforgettable wild ride and I still hear that little girl screaming in my dreams at night,” recalls Birdsong. 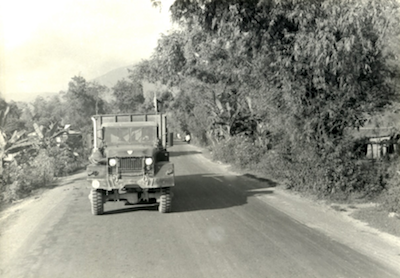 These behemoths hauled thousands of tons of dry cargo, e.g., C-rations, ammo, water, mail, sandbags, and sometimes bulk petroleum, transporting those cargos over primitive road systems to supply points throughout the Republic of Vietnam. They also performed the gruesome task of bringing back the bodies of the dead wrapped in body bags. Of the approximately 2.5 million men that served in Vietnam, almost everyone rode in these trucks at one time or another during their tour. At least couple of riflemen and an M60 gunner usually traveled in a convoy for security. The convoys ran through ambush-prone areas and were always subject to command-detonated mines in the roadways. Some convoys were big, up to over 100 trucks.

With a full load, the “six-by” rode okay; but on the way back, unloaded and cruising at 50 mph, you would be bouncing all over the truck bed ricocheting off the side rails and your insides would be playing leapfrog with your tongue. When the rain came, you would be drenched and there was nothing you could do about it. It was common for a line company of grunts to be transported into an area of operation on a few of these M35A2 deuce and a half trucks by the “Rough Riders.” This was limo service at its best for most Marines. It sure did beat “humping the bush.” 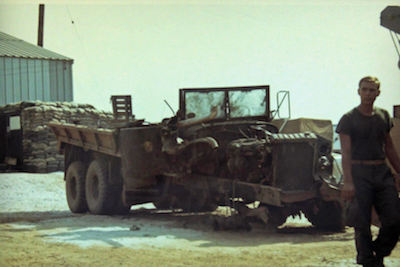 Corporal Raul Figueroa, an H&S weapon section Marine, remembers an assignment with the trucks at Liberty Bridge on the Thu Bon River south of the headquarters CP. His squad had been guarding the bridge and were ordered back to the CP. “Figgy” remembers, “Loading several fifty-five-gallon drums on the back of a ‘Six-By’ and the driver backed into the river until the water level started filling the barrels. The water would be used for the overhead showers at CP. Corporal Eddie Villegas, PFC Andrew Jackson, and I loaded all the drums with water, all the while the driver left the engine running. After loading the drums filled with water, Jackson sat on the rear end of the truck and lit a cigarette. Horseplay was not out of the question and the driver decided to pop the clutch on the M35 pitching Andrew backward out of the truck, asshole over elbows into the river. We laughed about that all the way back to camp.”

Some of these trucks, specifically Army trucks attached to the Marines, were equipped with a truly powerful weapon system. The Quad 50 was originally designed to be an air defense anti-aircraft weapon. It is a gun turret with four .50-caliber machine guns and a gunner that manipulates them right in-between the barrels in an open electric-powered turret. They were first used on mobile ground mounts. Early in World War II, they were mounted on trailers and then onto half-tracks. In Vietnam, they were utilized in semi-fixed positions to protect base perimeters. Then when supply convoys became a logistical necessity, mounting the Quad 50 on trucks for convoy duty became the norm. Ambushes and roadblocks were countered with the awesome firepower of one of these beasts. The typical truck with a Quad-50 had the driver, the gunner, and some loaders. These weapons could not follow a maneuver unit, but from a road or defense position were extremely effective, especially in breaking up ambushes. The Quad-50’s range and strike capability made for an ideal quick reaction weapon against machine gun positions and small arms on heights overlooking roads. Its rate was 1,000 – 1,500 rounds per minute, with an effective range of 2,500 yards. It was truly the security of most convoys in Vietnam.

The Lockheed C-130 Hercules, a four-engine turboprop transport aircraft, functioned in Vietnam as a troop, medevac, and cargo transport vehicle. It entered the military in the 1950s and is still the longest-used military transport aircraft. Its design made it capable of takeoffs and landings on unprepared and short-field runways. Its superior fifteen-ton payload and an ability to offload palletized cargo put it in high demand. During the siege of Khe Sanh in 1968, the Marines surrounded by the NVA witnessed these versatile aircraft coming and going, bringing in much-needed ammo and supplies and taking the wounded out throughout the seventy-seven-day battle.

After a generation of underpowered military cargo planes, the turbine engines endowed the C-130 with plenty of power. Those turboprop power plants gave the aircraft an ability to carry more, fly faster, and land and takeoff in small, rough, backcountry airstrips.

Some of the Marine line companies of 1/27 flew to and from the Hue City area in the C-130, as described in Chapter 5. 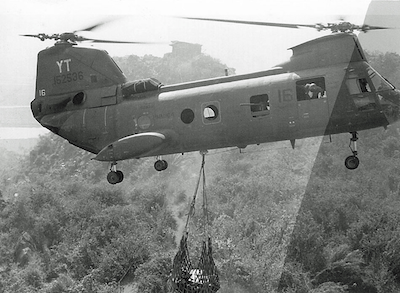 Known as the “Phrog” by the pilots that flew them, the CH-46 (pictured above) functioned as the principal troop transport for Marines. It not only transported personnel, but also evacuated the wounded, supplied Marines with reinforcements, water, and ammunition, and also the much-needed tactical supplies. The CH-46 performed hundreds of dangerous tactical insertions and extractions of Marine reconnaissance teams.

This workhorse could carry external loads with a belly sling hook (cargo hook), which was rated at up to 10,000 pounds. The power produced by the engines limited that capability depending altitude air density, weights and balances already onboard, and other external variables.

This aircraft was normally manned with a crew of three (Pilot, Co-Pilot, and Crew Chief) to accomplish most missions. A pintle-mounted .50-caliber M2 machine gun was mounted on both sides of the helicopter for its defenses.