To The Sound Of The Guns: Excerpt Ch 6

“Come what come may, time and the hour runs through the roughest day.”

After Tet, in the northern region, the 3rd Marine Division was still heavily engaged in confronting the incursions of NVA coming into South Vietnam off the Ho Chi Minh Trail corridors from Laos. While MACV had bolstered I Corps with additional troops early in 1968 and had sent the 1st Air Cavalry and the 101st Airborne Divisions north into Hue and the A Shau Valley, things were starting to heat up south and southwest of Da Nang in Quang Nam province. Rumors circulated through upper echelon command that a second Tet offensive would launch in the spring. Preparation for that possibility began in April.

After Tet erupted in February of 1968, it became apparent to 1st Marine Division Commander Major General Robertson that the enemy had reinforced their troop strength in the Go Noi area southwest of Da Nang. “Go Noi Island,” as it was called, encompassed the delta area straight west of Hoi An, the ancient village of the original Cham people nestled on the coast. Go Noi was not an island, but an area surrounded and formed by the seasonal waters of the Thu Bon, Chiem Son, and Ky Lam Rivers. The monsoon season would fill the rivers to the brim every year. Highway 1 and the national railroad dominated the eastern boundaries of this well-used NVA staging area. The activity in this area and the outlying regions compelled Robertson’s staff to begin planning in earnest.

In March of 1968, General Robertson, now with additional manpower, determined it would be advantageous to take the fight directly to the NVA in this area. On 4 May, the Operation Allen Brook offensive began with the 7th Marine Regiment launching the initial attack, under the command of Colonel Reverdy M. Hall. 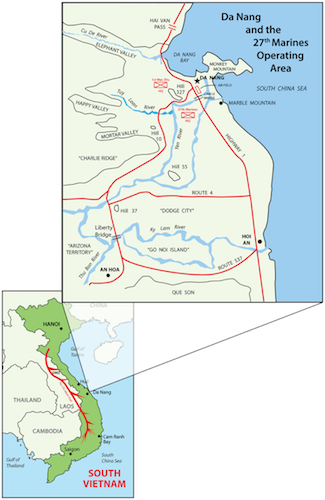 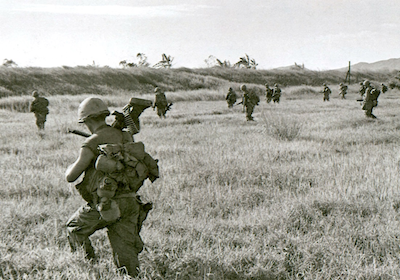 7th Marines press east toward the railroad tracks, Go Noi ~ Courtesy of Ron Dorsey, Fox 2/7, given to him by an unknown USMC photographer (DOD Photo)

Some of the Marine Corp’s fiercest operations in I Corps had already peaked in the earlier days of 1968 (Battle for Hue City and Khe Sanh). Two more major operations, Operation Allen Brook (officially 4 May – 24 Aug 1968) and Mameluke Thrust (officially 18 May – 23 Oct 1968), became multi-battalion exercises and among the larger operations conducted in Quang Nam province and I Corps during 1968. Operation Allen Brook netted over 1,100 enemy KIAs (Mameluke Thrust had a kill count of almost 3,000 enemy combatants; this operation lasted for a longer time span due to the area it covered).1

Operation Allen Brook took place in Quang Nam Province, RVN, to the southwest of Da Nang. Colonel A. G. Schwenk, commanding officer of the 27th Marine Regiment, was senior reporting officer from 17 May through 3 August 1968. The following Battalion Commanders fielded their units in this multi-battalion operation on the dates shown:

Colonel Schwenk summarizes the operation in his Commander’s Analysis of the 27th Marine Regiment Command Chronologies of August 1968:

a) …17 May – 6 June during which heavy contact was made with large, very well trained and well equipped NVA and Main Force VC units…

b) … During the period of 17 June to 3 August 1968, Allen Brook was oriented towards simultaneously accomplishing extensive land clearing/fortification reduction and conducting wide-ranging offensive operations to deny the enemy the use of Go Noi Island as a base area. The salient lesson learned was that close coordination of both tasks is essential. Since the area contiguous to Go Noi Island was not under effective allied control, the enemy had relative freedom of movement. Therefore, it was essential that offensive operations were aggressively pursued to preclude attacks by fire and harassing ground attacks…The need for constant maneuver and rapid movement to keep the enemy off balance, together with the extreme heat encountered, heavily taxed the endurance of the individual Marine. Frequent rotation of units in and out of the Allen Brook AO was accomplished in order to reduce the effects of fatigue…Flak jackets were not used and each man carried three canteens of water at all times…

c) The technique of using small teams consisting of snipers, artillery forward observers, and air control teams proved effective in interdicting enemy movement, particularly on the periphery of the AO…

d) The relative impact of the enemy’s use of mines and booby traps on overall conduct of the operation increased significantly as the enemy’s own movement in the area declined…Over 30% of the total casualties encountered came from mines or booby traps. The most effective counter to this threat was to deny to the enemy movement in the area. However, the strong VC ties to the civilian population in the area made complete removal of this threat impossible.

Liberty Bridge and the Go Noi

Liberty Bridge spanning the Thu Bon River became the de facto field communications command post for most battalions participating in Allen Brook. It was the starting point for a lot of the operations in the region. An Hoa, a few miles south of the bridge, was at the southern edge of the 1st Marine Division’s area of operations. Destruction of the bridge in May of 1968 by fire became a significant challenge in continuing logistical supply of Marines. Liberty Bridge was the major bridge connecting a supply route to the all-important An Hoa combat base. The immediate rebuilding of the bridge began by Marine combat engineers of the 1st Marine Division.

The terrain in the Go Noi area was generally flat while villages were overgrown with scrub vegetation, tree lines, and hedgerows. Dry river beds with sandy areas receded into elephant grass ranging from three to six feet in height. The elephant grass featured long slender palms of razor sharp edges which produced small cuts when pushing through the grass. It was excellent cover for enemy combatants. This grass evoked evil spirits; it was the bane of the Marine rifleman. 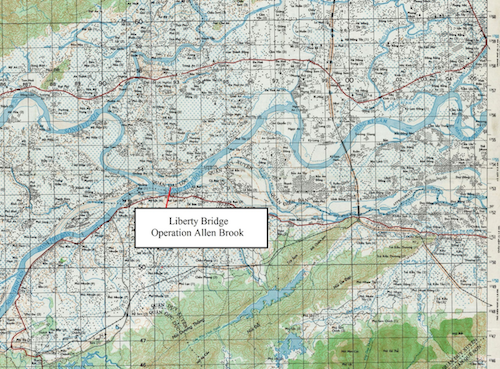 The maneuvering of battalions in the Go Noi Island area close to Liberty Bridge during 1968 became much like a game of chess. On 4 May 2nd Battalion, 7th Marines commanded by Lieutenant Colonel Charles E. Mueller kicked off Operation Allen Brook from the western side of the Go Noi, moving in an eastward direction. Intermittent contacts were made and on 9 May the battalion collided with a large enemy force at the railroad bridge over the Ky Lam River near the hamlet of Xuan Dai (2). This was the first of many battles during Allen Brook. This major contact resulted in close to one hundred KIAs and an unknown quantity of WIAs amongst the enemy combatants. The enemy would police up their dead and wounded and disappear, sometimes leaving distinct blood trails. The Marines regrouped after each contact, evacuated their wounded and dead, and again pushed forward in the heat and humidity. It was going to be a long campaign.2 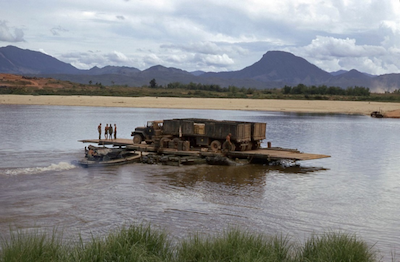 A few days into the operation, 3rd Battalion of the 7th Marines took operational control from 2nd Battalion, reversing the direction of attack and pushing back due west. On 16 May Lieutenant Colonel Roger H. Barnard’s 3rd Battalion surrounded remnants of the NVA regiments in that push. They had been operating freely throughout the Go Noi territory. They were dug in with excellent fields of fire and fortified positions and ready for battle as 3/7 engaged them in combat.

When that fierce battle subsided Barnard indicated they had uncovered a Regimental headquarters and a major staging area for supplies. Years later Barnard recalled the supplies and equipment they captured was so extensive that they could not evacuate all of it to the rear for an Intelligence analysis. They set about destroying what they could not send back to the rear. He indicated it had indeed been a major staging area for the NVA. This re-confirmed the earlier Intel reports of enemy activity.

In the very initial stages of the operation, Marines made light contact with local force and VC units. Then as the operation continued, the elusive NVA began to resist more strongly, especially when their caches and supplies were in jeopardy. This began the long-drawn-out search for an evasive enemy and their logistical infrastructure within the confines of this unique tract of land.

We use cookies to ensure that we give you the best experience on our website. If you continue to use this site we will assume that you are happy with it.OkRead more