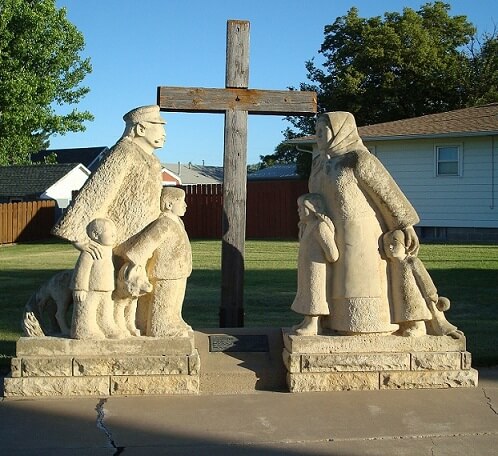 “Mr. Karlin writes that the Volga Germans were to start reporting to the Russian military service in 1874. His brother would be inducted by fall of 1875, so they decided to emigrate at once. He also points out that they were afraid of losing their freedom of religion. The priests were ordered to write down the words of every sermon to be inspected by Russian officials…Two representatives from this community were sent to America, and they ended up traveling to Larned, Kansas. When they reported to the colonists, the area was presented as “wild and strange,” but they all decided nevertheless to start selling out and making plans to migrate immediately…”

“…Then there were the light shows in the late evenings on the front porch of Grandmother’s house. She taught my sisters and me the art of watching a thunderstorm…They were ethereal visions of ever-changing mountains, white and gray in color, billowing and cascading, performing their nightly act in the play on the prairie theater. They were, as generations before ours termed, “the artillery of heaven.” We learned to sit quietly on the porch and view these satisfying and awesome displays of God’s work, letting our minds wonder what our Lord in his heavens had in store for us in days to come. Those evening buildups were, I suppose, presentations of hope for many a wheat and grain farmer on that vast prairie of western Kansas…”

“Emotions of the people in this area during the Civil War and afterward ran high. It likely was pride and loyalty for a way of life more than anything else that spurred the men of the south to join the Confederate Army. When debate about states’ rights and secession are set aside, evidence shows that the two armies were more alike than not. Perhaps the most significant characteristics shared by both armies was that the common soldier was largely unaware of (and unprepared for) what he would face in battle…”

Preview of Chapter 4  Below

Paperback and eBook Available at: